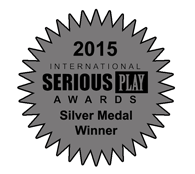 My eight year old son loves this game. It has quickly become one of his favorite and most used apps on our iPad. What’s great is that this game actually helps kids develop thinking skills, instead of just playing mindless games or watching mindless shows like Sponge Bob. It has some similarities to Sudoku but with an added twist. Your child must fill in the rows with shapes but match them up with colors too. My son has really improved his critical thinking skills and his teacher in school asked what has gotten him thinking more. I told her about this app and she was pleasantly surprised. Oh, parents can play it too. It’s not as easy as you think. A good, entertaining way to spend some time with your kid.

“it teaches students HOW to think in a systematic rational manner.”

“The ability to apply logical reasoning and deduction directly impacts a student’s performance in math, science, and daily life.”

“Playing not only improves attention but also self-regulation and executive functioning skills.”

Logic City Jr is an engaging app for all ages. My third grade students are challenged by the increasing difficulty but are encouraged because they are able to logically solve the puzzles. With each building the levels become more difficult but the rules are easily explained. I think this is a valuable app because it teaches the students to think in a different way than they are used to. Logic City develops the students logical thinking which is a critical skill to learn because it is required in problem solving . We use this app weekly and the students look forward to playing each week!   I also enjoy playing along with my students, I cant wait for Logic City to be released!

“Instead of your kids playing the same mindless games over and over again why not give them a bit of a challenge?”

“The LogicCity Jr app for your iPod touch, iPad, and iPhone is a great way to sharpen kids’ logic skills in an engaging way. The app is kid-friendly yet offers enough of a challenge that even adults will want to play.”

“Although addictively fun, LogicCity Jr. has serious educational chops and works with developing a child’s ability to think and reason independently.”

“I would highly recommend this game”

LogicCity Jr reviewed by Tom Cutrofello on his blog

“These puzzles are great for young puzzlers. Lots of elementary schools have enrichment programs for gifted students. This is exactly what they should be doing.”